Enjoy one of Scandinavia’s top orchestras as the Oslo Philharmonic opens the Carl Nielsen Festival 2022. Chief conductor Klaus Mäkelä, who at the age of 26, has had an exceptional career and is sought after by orchestras all around the world, will lead the orchestra and German star violinist Isabelle Faust in Berg’s violin concerto 'To the memory of an angel'. The concert naturally takes off with Carl Nielsen’s Helios Overture and ends with Mahler’s magnificent Symphony No. 5. This concert is presented in collaboration with Chamber Music at Lundsgaard. This morning’s team of musicians continue at the beautiful Hvidkilde Estate, where the concert is held in the baroque-style Great Hall. Carl Nielsen’s String Quartet opens the concert program and to finish it is Brahms Piano Quartet and its famously notorious finale, the Gypsy Rondo.
NB.: Limited seating.

This concert is presented in collaboration with Syddansk Musikfestival. Saturday’s symphonic special guest is WDR Symphony Orchestra from Cologne, led by their chief conductor, Cristian Măcelaru. The concert opens with Nielsen’s famous Dance of the Cockerels from the opera Masquerade, followed by Brahms’ Double Concerto with star soloists Nikolaj Szeps-Znaider (violin) and Gautier Capuçon (cello). Rachmaninov’s romantic and grandiose Symphony No. 2 will take us into the night. For the third chamber music concert of the festival, we are off to Bramstrup, the estate where a young Carl Nielsen guarded the geese in the nearby fields. Trio Con Brio plays Brahms, followed by the Danish String Quartet joined by leading world pianist Daniil Trifonov. From Trifonov’s core repertoire, they will play Shostakovich’s moving and intense Piano Quintet. Note: The concert is moved to Odense Koncerthus! unnumbered seats.

The Odense Symphony Orchestra and conductor, Pierre Bleuse, play a string of classical hits in the style of BBC's Last Night of the Proms. French supercellist, Gautier Capuçon, performs as a soloist in his countryman Saint-Saën's Cello Concerto No. 1. And as guest star is the singer, Oh Land (Nanna Øland Fabricius), who gives her interpretation of some of Carl Nielsen's most beautiful songs. The conferencier, Ole Bartholin Kiilerich, ties it all together, when we celebrate one of our great Danes: the composer, Carl Nielsen.

Welcome to an unforgettable symphonic afternoon at the Odense Concert Hall! Eighty-five years after Beethoven wrote his famous violin sonata Kreutzer, Russian author Leo Tolstoy penned a short story of the same name. Tolstoy’s work inspired Czech composer Leoš Janáček to write his first string quartet. This genius-tier chain of inspiration serves as the theme of the afternoon concert at Bramstrup, with a reading of Tolstoy and the music of Beethoven performed by two of the greatest names on the classical musical stage: Nikolaj Szeps-Znaider on violin and Daniil Trifonov on piano. London’s Philharmonia Orchestra, normally appearing in Royal Festival Hall, is coming to Odense to perform two concerts for the Carl Nielsen Festival. Daniil Trifonov—whom the London Times says is without question the most astounding pianist of our age—will perform as soloist in Tchaikovsky’s wonderfully virtuoso Piano Concerto No. 1. The concert opens with Carl Nielsen’s Overture from Saul and David and ends with the immortal symphonic classic, Brahms’ Symphony No. 4. Philharmonia’s second concert at the Carl Nielsen Festival will be conducted by festival artistic director and founder, world-renowned Dane Nikolaj Szeps-Znaider. This time, the solo in Brahms’ Violin Concerto will be performed by Szeps-Znaider’s equally famous colleague and friend, Maxim Vengerov. The concert will lead off with the snap-gesture from Nielsen’s most memorable element from Sir Oluf He Rides, The Prelude. Tchaikovsky’s epic and passionate final symphony Pathetique, will be the closing act of the Carl Nielsen Festival 2022.

AFTER CONCERT AT 10.00 PM*
AT ANARKIST BEER AND FOOD LAB IN ODENSE

The Danish/Swedish trio Dreamers’ Circus begins with folk music and then expands that sound across all genres. Every night, a section of the trio’s setlist is set aside for music by Carl Nielsen, who in addition to symphonies, concerts and chamber music, is known for his numerous songs and folk melodies. And with a little help of musical stars and special friends of the trio.

This is going to be fun! 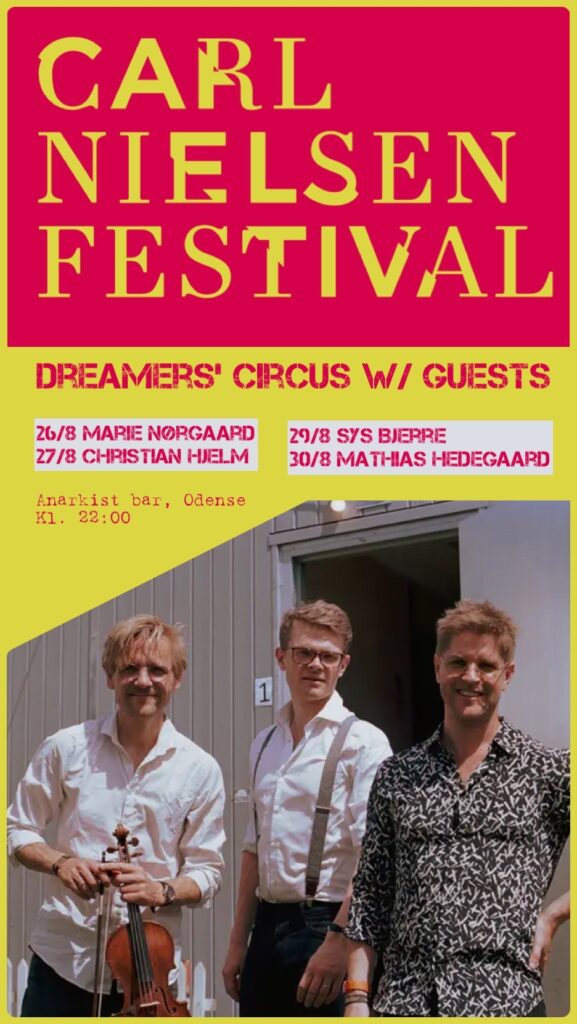